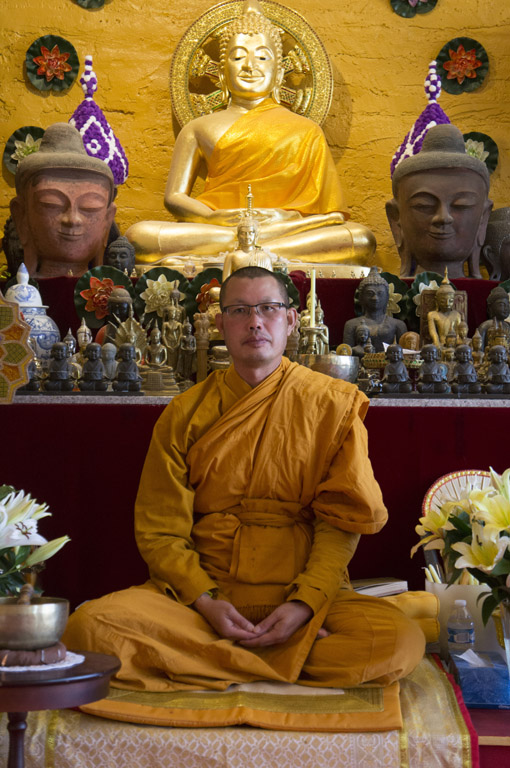 Ajahn Sarayut Arnanta is the founding abbot of the Wat Buddhametta: Tucson Buddhist Meditation Center and currently serves as the Vice-President of Dhammaratanaram Temple(the temple he first served in the US). Born in Chiang Rai, the northern province of Thailand, he became a monk in 1983 when he was 15 and took full ordination at age 21 in 1989. Ajahn, the title for a Thai Buddhist monk, means “Teacher” or “Master.” He is also a poet and has written a number of poems, some were published in “Sandscript” the literature magazine for Pima Community College. He regularly leads meditation: Vipassana (mindfulness) and Metta (loving friendliness) at Wat Buddhametta: Tucson Buddhist Meditation Center and elsewhere. Ajahn Sarayut has been teaching Buddhism and meditation since he first moved to the United States in 2000.

Prior to coming to the United States, he studied and practiced Vipassana meditation for many years with his master, Ajahn Suphan, the abbot of Wat Rampeong, Chiang Mai, Thailand. He spent one year doing missionary work in Malaysia. When he moved to the United States in 2000,he volunteered to teach Mindfulness meditation in a number of places including Dhammaratanaram Temple, Federal prisons, jails, and public libraries. Since 2000, Ajahn Sarayut served as secretary and treasurer of Dhammaratanaram Temple and in 2010 he became Co-President and Abbot. With intention to bring Buddhism and meditation to Westerners, in 2006 he founded the group, “The Way of Mindfulness Meditation of Tucson”. In 2009 he founded “Tucson Buddhist Study Group” with Ken Goldberg, attorney, and his dear friend and student. Ajahn Sarayut’s vision is to bring Buddhism to the heart of the local community of Tucson and surrounding area. He says, “If the teaching of the Buddha is universal it should work and benefit all people regardless of who they are and what faith they believe in.”

Ajahn Sarayut is very active in social work in the Tucson community. Currently he works with Brother Davis, a Franciscan monk dedicated to helping the homeless in Tucson and with Tucson Cultural Exchange, now merged with Tucson Meet Yourself, a non-profit organization that brings people from various cultures to work together in the Southwest. In the past, he worked with local organizations including Tucson Samaritan and No More Deaths. No More Deaths is a humanitarian organization dedicated to saving lives of people from Mexico and Latin counties who cross the Sonoran desert in order to seek a better life in the United States.

In 2009, with his intention and vision to bring Buddhism and meditation to more people in Tucson, Ajahn Sarayut(with the help of the Buddhist community)purchased the adobe structure and property that would become Wat Buddhametta. Located in the center of Tucson, this temple allows him to make Buddhism more accessible to the local community and better serve the Thai and Asian communities. Wat Buddhametta (the loving-kindness of the Buddha) reflects Ajahn Sarayut’s vision and great heart of loving-kindness and compassion for the community where he serves. His poetry writing about life and self-realization reflects a strong influence of Buddhism. His work is the dedication to the Buddha, his true Master of guidance to end suffering.

Ajahn Sarayut is a caring teacher and spiritual guide that gives his time and effort to the community. He allows to be reached by anyone when he is free from his busy schedule. Please refer to Ajahn’s calendar below to see availability to contact him for a one-on-one appointment.

In The Arms Of The Buddha

– By Ajahn Sarayut
In this old wooden house,
The home of the Buddha and
The house of discipline
Where I first learned to be myself
With the help of my Master.

It looks old, and it is old
Many generations before me
Boys were sent to this house
Many passed and some failed
To the power of this monastic life.

Now I sit on my bed
In the same room I share
With twelve other boys
We are from families
Of all kinds, good and bad.

I wish the daylight never ends
And the night never comes
This house and my room will fill with
The mystery of the darkness.

As the child I don’t like a four o’clock
Ringing bell early before dawn.
It wakes me from my dream
And drives me from my warm bed
To the chanting hall and to sit before the Buddha.

I would cover my head with a blanket
And murmur the chanting
With my fellow friends
Behind my Master
But still clinging to my dream.

Today, twenty-five years already passed
I’m glad I’m still here and I don’t fail
I thank to you all
Father, Mother, Master,
And especially you, the Buddha,
Your Dharma has kept me alive.